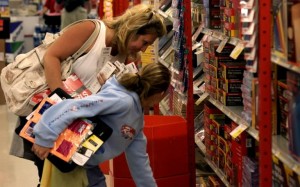 As summer continues in full-swing, we’re starting to hear those three little words that are feared by kids the country over, but usually celebrated by their parents: “Back to school.”

Each year, we look at the trends in consumer shopping behavior, as well as the advertising trends by retailers to see what kind of changes we can expect in what has become the second-biggest consumer spending event after the winter holiday season.

You’ve probably already noticed one of the most significant advertising trends for the back-to-school shopping season this year: it started really early.  As reported by the New York Times, many advertisers moved up the start date of their back-to-school campaigns for children’s clothing, stationery, computers, and other products.  Some ads were moved up so early that in at least one instance, an ad promoting buying such items on layaway ran in mid-June, when many schools across the country were still in session.

Why the rush to get out their early with back-to-school messaging?  The reasoning is pretty simple – with an uncertain economy, it behooves retailers to try to acquire as many sales as early as possible.  The article in the New York Times relates that it’s “not unlike how Madison Avenue has for years been advancing the start of the Christmas shopping season.”

Retail advertisers such as Kmart, Toys R Us, Target, and Best Buy all debuted their back-to-school campaigns at least a week or two earlier this year versus last year.  Part of the argument relates to the price of gas – higher gas prices means fewer shopping trips over the course of the summer.  So, consumers are shopping earlier in the season rather than making additional trips as the summer continues.

The above retailers used a lot of traditional media to promote their back-to-school campaigns, including newspaper circulars and monthly magazines, where the August issues (which went on-sale in July) of magazines such as All You, Family Circle, and Parents carried ads for back-to-school advertisers like Target, Wal-Mart, Lands’ End Kids, Kellogg’s, and Germ-X Hand Sanitizer.  Social media campaigns were also part of the mix, as retailers like Macy’s kicked-off their back-to-school campaign with an announcement on their Twitter feed.

Another thing retailers are doing with their advertising this year is offering more value for consumers’ dollars.  Programs such as Staples’ Back to School Savings Pass and special offers for shoppers with student IDs, to Target’s “Text to Get Coupon” where shoppers can receive an instant mobile coupon, are all designed to drive store traffic and increase the size of shoppers’ baskets.

That’s a good strategy, considering that spending for back-to-school is predicted to be relatively flat  this year, according to a study by the National Retail Federation.  Families with children in grades K-12 will spend an average of $603.63 on back-to-school items, compared to $606.40 for last year.  In total, spending on grades K-12 is expected to reach $22.8 billion; when combined with college spending, the total is a staggering $68.8 billion.

According to the study, parents are using three main strategies to stretch their dollars this season:

Almost 44% of shoppers said that the economy was “forcing them to simply spend less in general.”

An interesting trend is found in the purchase of electronic equipment like computers, cell phones, mp3 players, and tablet devices.  Average spending on these items is expected to increase to $189.51.  However, only 51.9% of families with school-age children plan to purchase electronics this year, compared with last year’s historic high of 63.7%.

In all, it should be a good season for department and discount stores, which are expected to see an increase in the number of back-to-school shoppers, credited to a combination of popular private labels, advertising/promotional activity, and innovative social media campaigns.