HomeBlog Retail Stores of the Future?

Retail Stores of the Future? 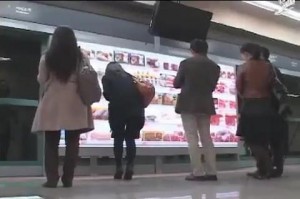 The 54th Annual International Festival of Creativity – the Cannes Lions – was held a few weeks ago at the end of June.  This annual festival celebrates the best creative product around the world, including awards for film, press, outdoor, radio, and PR.

One particular winner this year that caught our attention was a retailer in Korea called HomePlus (formerly Tesco), who won the Grand Prix Media Lion award for their very creative as well as very effective advertising campaign.

HomePlus was the number two retailer in Korea, but their objective was to become number one.  However, they were at a significant disadvantage compared to the number one retailer – they had fewer locations.  Research has shown that most Koreans tend to shop at stores closer to their homes since it is more convenient, so having fewer locations was a definite obstacle toward HomePlus achieving their goal.

Rather than let this stand in their way, the management at HomePlus partnered with their advertising agency to figure out a way to achieve their goal.  Their first step was to do research into the minds of Korean shoppers.  This was a very important first step that unfortunately often gets skipped when working on a marketing plan.  In this case, however, the research ended up being the key to HomePlus’ entire strategy.  Rather than trying to figure out what HomePlus could offer to the consumer, they instead focused on the consumers first and determined what their unmet needs were.

Following their consumer research, HomePlus’ agency developed a strategy to address these unmet consumer needs on a unique way that was better than what their competitors were doing.  And this strategy was designed to ultimately help HomePlus achieve their original goal – becoming the number one retailer in Korea.

So, what was the unmet need they uncovered?  They found that Koreans are “the second hardest working people in the world” (based on the number of hours worked per week).  Because of this, the average person living in Korea has very limited time to grocery shop, and they find the task of grocery shopping to be a hated weekly chore that they would rather skip.  They needed a way to make grocery shopping more convenient and less time-consuming.

This need led to HomePlus’ agency’s strategy – to completely re-define how people shop.  Rather than driving traffic to their stores, they instead brought their stores to the people.  HomePlus developed a unique combination of innovative mobile media married with traditional out-of-home advertising at subway stations to create “virtual stores.”  The advertising panels at the subway stations were turned into flat two-dimensional replicas of the actual store shelves, showing all of the products available and even the special merchandising done in each store section.  Each product had a special QR code that consumers could scan with their mobile devices to add to their online shopping cart, and when they were finished, they could check-out and have their groceries delivered to them after they got home from work, all without ever having to go to the actual store.

This strategy of using consumer research to gain insights, and then developing an inventive strategy that combines one of the newest media types (mobile) with one of the more traditional types (out-of-home) helped HomePlus to become Korea’s number one online retailer, and a close second in terms of offline sales.

As mobile media and QR codes gain higher penetration in the U.S., we envision these types of “virtual store” strategies will be adopted across a wide variety of retailers, particularly for low-cost goods that need to be purchased frequently like groceries.

You can view a YouTube video showing an actual HomePlus virtual store here.