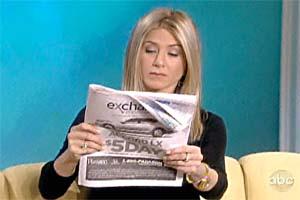 I was checking out an article on AdWeek last week that was pretty amusing.  The title of the article was “Jenifer Anniston Endorses… Paragon Honda?  A car dealership gets a lucky break.” Basically, the gist of the article was that during an interview on TV’s “The View” to promote her latest movie, Anniston was handed a copy of the New York Daily News in order to comment on an article in the paper.  As Anniston held the paper up to read, a full-page ad in the paper for Paragon Honda was visible on camera, getting all of that extra exposure to millions of TV viewers.

This was obviously quite a coup for Paragon Honda, who just happened to have bought a newspaper ad that benefited from the old “right time, right place” adage.  The general manager of the dealership was quoted as saying, “If we had orchestrated the whole thing, we couldn’t have done it so well.”  Obviously, when things like this happen it’s the result of a happy accident.  You can’t really plan these types of things.

Or can you?  The bigger picture concept of the newspaper ad working in concert with television exposure got me to thinking about the often overlooked idea of media synergy: that the whole of two different media executions is greater than the sum of its parts.

The concept of media synergy is really nothing new, but it’s one that often gets lost in the quest to find “the best” medium that delivers the highest ROI.  Numbers-oriented people tend to focus on these types of questions, which are of course very important in our work.  Delivering a high ROI is (or it should be) a priority goal for every media campaign.

However, ROI measurement systems usually tend to focus on the individual parts of a media campaign, gauging the impact of TV versus print versus online in terms of driving sales, awareness, etc.  Very seldom do they look at the entire campaign as a whole to measure the ROI of using media in concert with each other, which is really unfortunate, because what tends to happen is that people focus on the top performing ROI media types to the exclusion of all others without taking into consideration that the campaign as a whole is what delivered the ROI.

As I was being trained in the business, the idea of doing a single medium campaign was basically non-existent.  We all knew that no matter how many of your potential consumers used a particular medium, there were always going to be some of them that would be missed if you limited yourself to just that medium.

But media synergy goes beyond that, to looking at creative uses of how media can work together.  It involves a deep understanding of the target and how (and even when) they consume media, as well as understanding the product or service you’re selling in order to take advantage of each medium’s strengths to highlight it.  Add in some creative media thinking and you can generate some great ideas of media working together to generate purchase intent, higher awareness, and ultimately, sales.

As just one very basic example, consider the short message potential of a 10-second radio traffic sponsorship.  Commuters in big cities hear dozens of these announcements every day as they make their way to work.  Imagine a grocery store that’s trying to promote their ready-made hot meals during the evening commute, quickly trying to make their claims in only 10-seconds.  Sure, it might be effective.  But consider the power of the commuter hearing that message right before he sees a billboard with a picture of the food and even short directions to the closest store.  Both messages working in concert will be much more powerful than either message viewed or heard in isolation.

Sure, that’s a very easy and basic example, but it just serves to illustrate how, with the proper research and understanding, very powerful and creative media campaigns can be designed around two or more media types working together.  Tons of other examples abound – TV and online, radio and mobile apps… the list goes on and on.  It’s really just about embracing the idea and then using research and data to learn how media synergy can work.