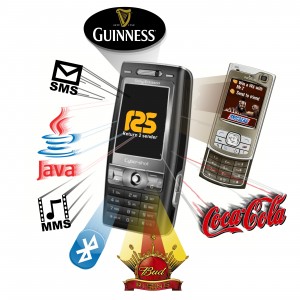 We had a completely different blog post scheduled for this week, but we changed our minds after attending a breakfast seminar on mobile marketing hosted by thinkLA last Thursday morning.  The purpose of the seminar was discuss the current state of mobile marketing, and highlight some case studies of advertisers and agencies that are thought to be on the cutting edge of using mobile technology to promote their brands.

As we mentioned in our previous post on “New Uses for Social Media”,  we are big supporters of how mobile marketing can be used as a tool to help drive traffic to retailers and increase a customer’s basket-size (how many items they buy at the store) before they check-out.  So, we were very interested in seeing some of the new and different ways that mobile marketing is being used by some of the innovators using this new media format.

Although everyone attending the seminar was going to walk away with different key take-aways, here is our list of thoughts on the presentations in the context of helping our clients’ businesses.

Mobile Media is not a way to increase reach – at least, not yet. The numbers that the key note presenter, Scott Jones (Co-Founder, Chairman, and CEO of Cha-Cha), presented were extremely enlightening.  Although cell-phone penetration in the U.S. is currently over 80%, he mentioned that only 37% of users currently have smart-phones, and those are split among many different carriers, device-types, and platforms.  Although Android has over-taken iPhone as the #1 smart-phone (in terms of sales), both of them represent only 19% of all cell phone users in the U.S.  Given the fragmentation among smart-phone users, as well as recognizing that nearly 2/3 of Americans don’t even have smart phones, creates a situation where it would be extremely difficult to execute a mobile program with any kind of reach without spending a lot of time and resources to implement them across multiple platforms.

As a few examples, one major movie studio in conjunction with their digital media agency presented a case study involving a game app they created to promote the launch of a new movie back in 2010.  They discussed all of the hurdles and headaches involved in making the app for the iPhone, only to change their mind at the last second and switch the app to be for the new iPad, which was debuting right around the time that the app was coming out.  Most enlightening was when they mentioned that, at the end of the campaign, they had achieved 1.5 million downloads of the game app, which they deemed a success.  We don’t know what their objective was in terms of how many downloads they were looking for, but it seems the client was pleased.  The number of 1.5 million downloads is certainly nothing to sneeze at, but, just as example, a random issue of Entertainment Weekly reaches nearly 11 million readers.

Another case study for a car manufacturer that was new to the luxury car category involved the agency working with a mobile production company to develop a “greeting card” type of app for business travelers on the go, so they could send personalized greeting cards to their friends, family, and colleagues while they were away.  The app was designed to enable the user to upload photos and even record voice-messages to include with the customized greeting card.  It was a very unique execution that was directly on strategy for the types of consumers this car manufacturer was seeking to reach.  For the results of the case study, they mentioned that they achieved over 60,000 downloads amongst the Blackberry users they targeted.

At the end of the day, what does this tell us?  That currently, mobile marketing is more about engagement with a very select group of your target audience.  The ability to engage consumers with mobile is its true benefit right now. The reach aspect will start to come later, when smart phone usage gets up into the 70%+ range, which is predicted to happen as early as 2012.

Mobile media measurement is in its infancy. Most of the programs discussed during the case studies measured their success by the number of downloads achieved.  The conversion rate, such as calculating how many people that downloaded the movie game app went on to attend the movie during opening weekend or determining how many people ended up test driving the car after they downloaded the greeting card app, was not tracked for these campaigns.  When we asked the question about conversions to one of the presenters, the answer was that those types of measurements are very difficult to track.

And that’s very true.  It’s as true for mobile media programs as it is for traditional media.  It’s very difficult to pin down how many leads come from a magazine ad or TV spot, for example, without paying for a very expensive ROI audit to get to these answers.  Mobile media, at this stage, is no different.  And perhaps there’s a lesson there – that advertisers seem to hold any type of “digital” media to a different standard of measurement than we do traditional media.  Maybe it’s time for that double-standard to change.

Our last key take-away as we left the seminars today was a positive one, filled with potential for advertisers who are ready to risk a little to gain a lot.  Mobile media is not a fad – it’s becoming extremely important, and companies that want to be able to take advantage of it in the future when it’s more prolific should start thinking about testing the waters now, while it’s still somewhat in its infancy and the costs, as well as the potential risks, are somewhat low.