HomeBlog Is Comic-Con a Marketer’s Dream?

Is Comic-Con a Marketer’s Dream?

July 22, 2011 By admin No comments yet Conventions, Marketing, Targeting 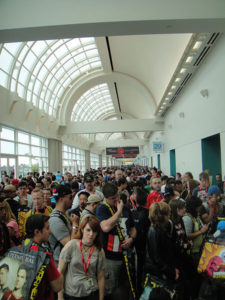 As you might have heard in the media, or from your friends with discerning tastes, yesterday marked the start of the 41st annual San Diego Comic-Con, a four-day convention where a handful of nerds get together to recite quotes from “Monty Python” and talk about comic books.

Is that the image that pops into your head when you hear the phrase, “Comic-Con?”  If so, you’re probably not alone, but you also couldn’t be more wrong.  While the first few comic conventions back in the early 1970s might have been similar to the above scenario, things had already started to change by the mid-70s.  The first three-day convention in San Diego in 1970 brought in 300 fans to see the official guests of Forrest J. Ackerman (a science-fiction fan and promoter) and Mike Royer (a comic book artist and inker who later worked with Jack Kirby at DC Comics).  A scant six years later, the convention brought in over 3,000 fans and had become big enough that a marketing genius named Charley Lippincott brought a little film called “Star Wars” to share with fans a year prior to its theatrical release.

Flash forward to today – the 2010 Comic-Con brought in over 130,000+ attendees, and now all attendees must register in advance – there is no more on-site registration allowed.  All this for a comic book convention?  These days, it’s significantly more than that.  As Sandy Cohen from the Associated Press notes:

“Sony will showcase seven upcoming films at the four-day convention. Paramount is bringing Steven Spielberg to his first Comic-Con. 20th Century Fox is ballyhooing its film slate, including ‘Rise of the Planet of the Apes.’ Universal is holding its world premiere of ‘Cowboys & Aliens’ at Comic-Con.

Small-screen offerings include Showtime’s ‘Dexter’ and ‘Shameless,’ Fox’s ‘Glee,’ ‘Family Guy’ and ‘The Simpsons,’ HBO’s ‘True Blood’ and ‘Game of Thrones,’ and dozens of other popular shows.”

Did you notice how none of those exhibits above have anything to do with comic books (with the debatable exception of the movie “Cowboys & Aliens”, which is technically based upon a graphic novel)? That’s what Comic-Con has turned into – a marketer’s dream for showcasing products, as film-maker Morgan Spurlock puts it, to “the creme de la creme of all those people, of all those fans, of all those bloggers, of all those ticket buyers who are the most discerning of fans and who will scream from the mountaintops when they like something.”

The so-called “geeks” who attend Comic-Con have turned into “the crème de la crème” of marketers’ target audiences.

Another interesting phenomenon is that Comic-Con has grown beyond just “genre” properties like fantasy and science-fiction movies, video games, and television programs.  A friend of mine works at another ad agency here in Los Angeles and his client is a global packaged goods company that makes, among other things, mass market candy bars.  They have a booth at Comic-Con this year.  A candy bar.  They’re at Comic-Con partly because their target audience includes many of the young males who attend Comic-Con, and partly because they are working on a corporate tie-in with an established “geek” property.

The times sure have changed from that little convention with 300 people back in 1970.

And, it’s not just the big guys who exhibit at Comic-Con.  For every Sony, Marvel, Warner Brothers, and Hasbro with their giant booths  and massive budgets at Comic-Con, there are just as many little companies, and even individual artists and owner-creators, who have small booths and are looking to grab some time in the spotlight among the very desirable audience that attends Comic-Con.  As the Generation Y Marketers blog “whowhatwherewhenY” points out, Comic-Con is a perfect marketing case study for mass marketing versus niche marketing.  It represents both types of marketing at the same convention.

Lastly, another phenomenon to come out of Comic-Con is partly a result modern society’s addiction to social media – it’s how film-makers (and, in turn, other marketers at Comic-Con) utilize the power of Comic-Con with reviewers and influential bloggers.  Dustin Rowles at movie critic site Pajiba notes that the people who are getting super excited and tweeting excessively about the carefully crafted celebrity panels at Comic-Con aren’t just the average everyday fans who waited in line for hours, but journalists and film-bloggers covering the event.  The marketing teams at the major studios have realized that they can create excitement and buzz for their properties by appealing to the geek-side of the very same professionals who will be reviewing them for their readers.  While some see this as a huge conflict of interest, others see it as just a changing “sign of the times” regarding the blurring lines between marketing and editorial.

The bottom line is that Comic-Con may not be exactly what you perceive it to be.  For good or ill, it’s become a social barometer for an audience with the power to propel a brand to the heights of success, or consign it to the depths of marketing oblivion.