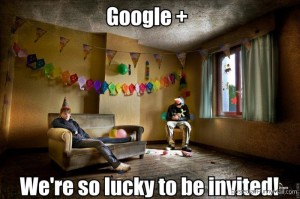 Although we were quite alarmed when we read that apparently every hour of TV you watch may shorten your lifespan by 22 minutes, we decided to move that morbid topic aside for another gloomy one – the death of Google+.

A few days ago, Forbes contributor Paul Tassi offered a “eulogy” for Google+, saying “Google Plus is a failure no matter what the numbers say.”

That’s a pretty bold statement, but Paul brings up some interesting points, even if he did base them mostly on his own first-person research.  Although Google+ has reached 25 million users in barely a month, making it one of the fastest growing websites in history, Paul claims that on his Google+ page, there is little to no activity, “full of people who signed up but never actually stuck around to figure out how things worked in this new part of town.”

Paul brings up two very interesting analogies, and both do make a certain amount of sense.

Firstly, he mentions how Google is essentially the king of the search engines, and yet a few years ago, millions of dollars were pumped by Microsoft into the development of Bing. Although, Paul points out, sometimes you may get frustrated when searching for something on Google, “99.99% of the time, it fulfills its function exceedingly well.  So why on earth would anyone feel the need to switch to Bing?”  He’s got a great point here.  Yes, Bing works as a search engine, but it really doesn’t offer anything that’s better or that much different from Google.  If you’re already using Google and happy with it, what’s to incentivize you to switch to using Bing?  The same analogy holds true between Facebook and Google+.  Yes, there are some neat bells-and-whistles on Google+ that Facebook doesn’t have (yet – stay tuned, they’ll be coming), there really doesn’t seem to be much need to take all of the information that you’ve spent the past 5+ years putting on Facebook and move it over to Google+.

Another reason you might not want to move that information over is that fewer people will see it on Google+.  Paul’s second analogy about Google+ relates it to a trendy night club.  Yes, it might have slightly better drinks and music, but it’s still not going to be fun if none of your friends are there to hang out with.

Interestingly, while this analogy does hold true for now, it’s partly where Paul’s argument starts to break down.  Paul seems to be thinking of Google+ as a complete replacement for Facebook, and by those standards, it’s really never going to measure up.  Yes, Facebook might have reached saturation and, as Paul points out, someone might be “an active poster on Reddit, an avid user of Facebook and a dedicated World of Warcraft player, but that’s approaching the maximum online presence limit as is… Add in Google+, effectively a duplicate of Facebook, and there just isn’t space for it.”

That’s true, if you’re thinking of Google+ as a replacement for Facebook.  But, based on our experiences and research, Google+ can hold a different place in peoples’ array of social networks.  Yes, it seems silly to make duplicate posts or upload duplicate pictures on both Facebook and Google+.  But, where we’ve seen Google+ have a niche is bringing people together who might not necessarily already know each other or be friends, but instead share common interests.  To follow Paul’s example of using first-person research, one of our staff’s largest circle of “friends” on Google+ is actually comprised solely of individuals he learned of from reading blogs dedicated to tabletop gaming.  These are people he has never met in real life, but he can share information on gaming with them that his other friends, the ones on Facebook, would have no interest in.  And, the functionality of Google+ means that these gamers can actually get into a Google+ “hangout” and game online in real time.

Granted, this is just one small example, but it shows how, if Google+ plays their cards right, they can exist and even thrive in an increasingly competitive social networking universe.  And don’t forget that we haven’t even seen yet what Google+ plans to do with its business pages, which should debut next month.

Overall, it seems way too early to be announcing the death of Google+, unless of course, it’s been watching a lot of TV.