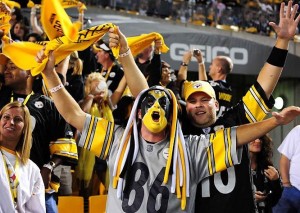 The reasons for the potential lockout were varied and a little confusing on both sides of the argument.  Over at the Bleach Report, they have put together an “NFL Lockout for Dummies” slideshow to help you navigate the ins-and-outs of the arguments between the players and the owners.

“How is this important to the business of advertising?” you might be asking.  The answer is quite simple: NFL is huge business.  The potential lockout was predicted to cost a total of $12 billion dollars, with the TV networks being out a quarter of that, at $3 billion.  Other parties that would have lost out include the sponsors and advertisers, websites, Fantasy Football Leagues, sports bars, and stadium workers.

Over the past few years, football has steadily increased its audience and its fan-base, which for the networks means increased rating points available to sell to advertisers, and increased revenue from selling ad time.  Fox, CBS, NBC, ESPN, and DirecTV pay a combined $4 billion annually in TV rights deals with the NFL, and those deals would have stayed in place regardless of whether a 2011 season had moved forward or not.  In return, the networks receive back about $3 billion a year in advertising revenue for the games.  That ad time has, for the most part, already been sold during this year’s Upfronts back in the late spring.  The networks had no choice but to move forward with selling their NFL inventory in the hopes that the season would materialize as they hoped.

They stood to lose a lot should the lockout have continued and the season been postponed or canceled.  NFL games represent a large pool of television ratings points for the networks that air the games.  According to industry sources, 11 of the top 13 programs in 2010 that generated an audience of over 30 million viewers were live sports or sports-related programming.  Many of those were NFL games, including of course the biggest ratings-generator of all, the Super Bowl, which in 2010 reached over 106 million viewers to become the top-rated telecast in the history of television.

What would have happened should the two different sides not come to an agreement?  Besides affecting things as diverse as Las Vegas sports books, which stood to lose $850 million, and national chain restaurants, who anticipated a 40% drop in Sunday restaurant sales (according to Nation’s Restaurant News), the entire television ad industry would have been dramatically affected.

One has only to look back on the history of sports strikes to see the impact.  Even way back in 1972, the MLB player’s strike, which lasted less than two weeks, cost broadcasters $5 million in advertising revenue.  Adjusted for inflation, that’s nearly $27 million in today’s dollars.

For the potential 2011 NFL Lockout, the loss of the rating points from NFL games would mean that the networks would have needed to give the money back to advertisers who wanted to buy NFL programming, or else shift those dollars into programs with lower ratings.  But shifting those dollars isn’t that easy – it means having to combine commercial time together across multiple programs in order to achieve the same ratings that one NFL would have generated.  This situation would create a lower supply of ratings points to go around, as the remaining rating points were gobbled up by advertisers who wanted to buy time during football.  And, of course, we all know what happens when there is a lower supply of something – the demand for the remaining supply goes up, as does the cost.

It can’t be stressed enough just how much impact a canceled NFL season would have meant to the advertising industry, particularly on television and online (think of all of the lost online ad revenue for the $5 billion fantasy football industry alone).

Fortunately, it didn’t happen.  The NFL Players Association and the owners came to a mutual collective bargaining agreement.  As is normal for these types of situations, the agreement resulted in neither side getting “everything they wanted”, according to NFL Players Association executive director DeMaurice Smith.  “But we did arrive at a deal that we think was fair and balanced.”  The collective bargaining agreement lasts for 10 years, so you can start tail-gating now to celebrate not having to pay exorbitant prices for replacement TV inventory.

Now all we have to worry about is a delayed or canceled NBA 2011 season, which is worth an estimated $1 billion in advertising revenue.